Huwaida Arraf, a Palestinian-American from Michigan, is a human rights activist who was on board the aid flotilla that came under attack Monday, in a raid that left nine dead. 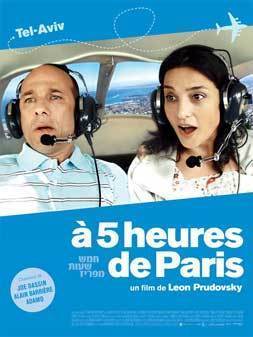 The news website France-Info reported late on 4 June that a French cinema chain decided to cancel screenings of an Israeli film, Leon Prudovsky's Five Hours From Paris to protest Israel's attack on the Gaza Freedom Flotilla on 31 May which killed at least 9 and injured dozens of humanitarian activists attempting to break the blockade of Gaza.

The report states (my translation):

The feature film is supposed to open on 23 June in about forty cinemas in France. The film has no connection with the political and military events of recent days, but for several days the cancelations have been mounting. In canceling this feature, the Utopia network of cinemas intends to register a protest.

Utopia, which has cinemas in Avignon, Bordeaux, Montpellier and Toulouse decided to show instead the film Rachel (2008), a documentary by Simone Bitton dedicated to Rachel Corrie, the 22-year-old American peace activist crushed by an Israeli bulldozer in the Gaza Strip in 2003 as she attempted to prevent the destruction of Palestinian homes.

The canceled film Five Hours from Paris is a romantic comedy about an Israeli who dreams of visiting Paris, but must overcome his fear of flying. Ironically, 1.5 million Palestinians have been imprisoned in the Gaza Strip for four years (and they are also afraid of flying Israelis, albeit in F-16s), and are virtually banned from traveling for almost any purpose, including study or family reunification. Hundreds have died due to long delays or refusals of permits to leave Gaza for urgently needed medical care. Few Palestinians in Gaza -- where 80 percent of the population are refugees -- can ever dream of a holiday in Paris.

Moroccan-born Simone Bitton, who emigrated to Israel with her family as a child in 1966, previously made Wall among other films.

Early on 5 June, Israeli forces hijacked a ship named for Rachel Corrie, with activists including Nobel Peace Prize winner Mairead Maguire and aid supplies aboard, as it attempted to break the blockade of Gaza.

(Off the Gaza coast, 5 JUNE) - Just before 9am this morning, the Israeli military forcibly siezed the Irish-owned humanitarian relief ship, the MV Rachel Corrie, from delivering over 1000 tons of medical and construction supplies to besieged Gaza.

The Corrie carried 11 passengers and 9 crew from 5 different countires, mostly Ireland and Malaysia. The passengers included Nobel Peace Prize laureate Mairead Maguire, Parit Member of the Malaysian Parliament Mohd Nizar Zakaria, and former UN Assistant Secretary General, Denis Halliday.  Nine international human rights workers were killed on Monday when Israeli commandos violently stormed the Turkish aid ship, Mavi Marmara and five other unarmed boats taking supplies to Gaza. Prior to being taken hostage by Israeli forces, Derek Graham, an Irish coordinator with the Free Gaza Movement, stated that: "Despite what happened on the Mavi Marmara earlier this week, we are not afraid.

Just spoke with Greta Berlin of the Free Gaza Movement (FGM). FGM received direct communication with the boat within the past half hour. Approaching from the south along the Egyptian coast, but outside Egyptian waters it was about 35 miles from Gaza. It was being trailed by two Israeli warships and an fast boat was also approaching it quickly.

Today, Israel released what it claimed to be the audio of a conversation between Israeli naval vessels and the Turkish-owned ship Mavi Marmara which occurred prior to the Israeli assault that killed at least 9 passengers and injured dozens more in the early hours of 31 May in international waters in the eastern Mediterranean. This audio clip, which the Israelis titled "Radio Transmission from Mavi Marmara to Israeli Navy" appears to be fabricated.

The following is a transcript of the audio:

ISRAELI SHIP "This is the Israeli Navy, you are approaching an area which is under a naval blockade"

WOMAN'S VOICE "We have permission from the Gaza Port Authority to enter."

On hearing the recording Adam Shapiro, co-founder of the International Solidarity Movement, identified the woman's voice as that of his wife Huwaida Arraf, chair of the Free Gaza Movement. However, Arraf was not aboard the Mavi Marmara. She was aboard one of the small passenger vessels in the six-boat flotilla, called Challenger 1. She recounted what she experienced on Russia Today, among other major media outlets (video below). It would appear that Israel has once more been caught fabricating evidence in its desperate effort to justify its violent assault on the Free Gaza Flotilla, a civilian convoy carrying humanitarian aid to the blockaded Gaza Strip.

Thanks to Marian Houk (http://twitter.com/MarianHouk ), I have learned that the Israeli army originally uploaded a video (below) in which the same naval officer in the video above has an innocuous conversation with a ship in which the only reply from the ship is "Negative, Negative, our destination is Gaza." There is no "anti-Semitism" or anything that paints the Flotilla passengers as raving bigots. The earlier video actually shows the officer moving, whereas in the previous video in which a speaker allegedly says "Go back to Auschwitz" we simply see a still picture of the same naval officer while the audio plays. This is further evidence of complete fabrication.

Following the exposé of its audio fakery by this and other blogs, the Israeli army released what it claimed was the full audio clip and transcript. However as Max Blumenthal demonstrates, even the Israeli clarification and "full" audio appear to be doctored. Blumenthal concludes -- and I concur -- that "The lesson of the debacle is that nothing the IDF says can be trusted by anyone. Not ever."

AssociatedPress — June 04, 2010 — Israel vows to keep an Irish aid ship from breaching its blockade of the Gaza Strip. But Nobel Peace Laureate Mairead Corrigan, who is aboard the boat, say she has faith that Israel's humanity will allow the ship into port. (June 4)

As the international community is engaged in a biased rush to judgment against Israel and a diplomatic lynching, now is the time for the United States to firmly stand with the Jewish state and its people.  The U.S. must show the world that it not only supports Israel's right to defend its borders and citizens against terrorism, but that it supports Israel's right to protect itself from people who pretend to be "peace activists," and parade under the guise of humanitarians while supporting Hamas and violently attacking Israeli military personnel.

America should assert a moral voice and declare that it will not join the global community in a cynical, double-standard, hypocritical and expedient effort to condemn Israel.  The U.S. should reiterate its support and understanding for Israel, that as a sovereign and democratic nation it has the right to act on behalf of its national security and express its confidence that Israel can conduct its own investigation into the matter without the intrusion of international bodies.

Abe Foxman and his "Anti-Defamation League" (ADL) never encountered an Israeli crime or massacre that they didn't immediately fall in love with. But they have managed to outdo themselves here by whining that Israel faces a "diplomatic lynching" -- evoking the image of African Americans being murdered by white racists -- to defend what in fact was a lynching by Israel of civilians on the high seas. Their cheap propaganda echoing Israel's would be risible if the Israel Lobby, of which the ADL is a key part, did not hold so much influence over discourse on Israel in the US. This ironically named ADL, it seems, specializes in defamation and dehumanization and justification of criminal violence. This is an organization for which there is absolutely nothing that is impermissible in pursuit of Israel's -- and their -- horrifying and rabid nationalism and ethno-centricism.

Next flotilla -- just sink it. Torpedo it. See how many more flotillas follow. The condemnation won't be any different. But you'll stop seeing cowardly western leftists signing up to sail with the terrorists, and you may even dent the number of terrorists who'll want to sail, and you'll see less ship owners willing to lose their boats. Better that than even one more Jew being injured while boarding these floating Jenins.

In a shocking article, excerpted above, in The Jewish Week, Associate Editor Jonathan Mark incites the mass murder of civilians on the high seas -- as if what Israel already did to the Gaza Freedom Flotilla is not enough.

For advocating peace, justice, equality for Palestinians and Israelis, international, and an end to racism, Palestinians and their allies are routinely villified as "extremists," "radicals," "terrorists" and "terrorist-lovers" and so on. "Polite" American society from Barack Obama on down shuns anyone critical of Israel.

Yet here, in one of the "respectable" newspapers of the American Jewish community comes another example of the casual vilification and calls for mass murder which pass without any notice or outrage from the American mainstream. More evidence of the sickness that lurks in America on the subject of Israel.

It's often said that Israel has a "free" and "independent" press, a rare thing in the region. With the increasing frequency of military censorship and gag orders -- such as those placed on the recent arrests of Anat Kamm, Ameer Makhoul and Omar Said -- as well as the news blackout on the hijacked Gaza Freedom Flotilla ships -- the pretense of a free press in Israel is becoming increasingly threadbare. But apart from government imposed censorship, there is the voluntary censorship and manipulation offered up by "patriotic" Israeli journalists. Take for example, Yair Lapid, a prominent Israeli journalist and TV news anchor. Writing on Ynet, Lapid excoriates the Israeli government's "amateurish" PR response to the Gaza Flotilla. His assumption, like so many other Israelis, is that there is no inherent problem with Israel's actions -- it is merely a problem of hasbara, literally "explaining." But Lapid goes even further to make an extraordinary proposal for what "good" government PR looks like:

You want an example? Had they [the government] knew [sic] something about it [good PR], the dozens of TV crews who arrived at the Ashdod beach Monday would have encountered, arranged right on the sand, the hundreds of missiles and other weapons we seized in the previous ships that attempted to reach Gaza. And do you know what the foreign TV crews would have done? They would have photographed that! And those would have been the only images aired during the first hours by all global television channels. Why? Because they had nothing else to air and TV stations usually prefer to air an image - any kind of image - than not to air anything.

Lapid proposes fabrication and fakery on an even grander scale than Israel already carried out. No weapons found on the Gaza-bound ships? Easy, just bring in weapons from elsewhere and spread them out on the beach! Lapid says -- correctly -- that this would have been the only thing the dozens of TV crews could film, but that is only because Israel banned all media access either to the hijacked ships or the kidnapped passengers including dozens of journalists who were held incommunicado by Israel while it stole their footage and photographs to manipulate for propaganda purposes. Lapid doesn't challenge that blackout, he supports it! His only gripe is that Israel did not fabricate enough damning "evidence" to paint those it murdered and injured as "terrorists." Leading Israeli journalists like Yair Lapid don't need government pressure; they enlist voluntarily in the war on journalists and the truth. 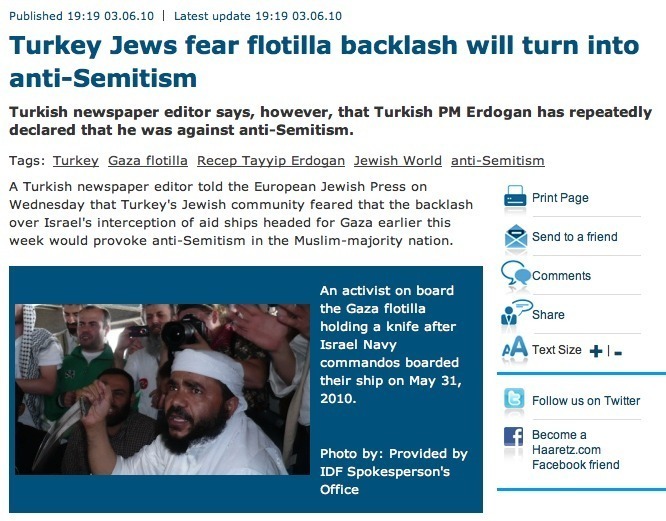 In an article this morning about fears of "anti-Semitism" in Turkey, Israeli newspaper Haaretz is reusing a photo with caption (above) it published first a few days ago that is obviously fake. I explain why here.