The one hour long raw footage released by Cultures of Resistance (CoR) of the 31 May Israeli attack aboard the Mavi Marmara shows clear evidence of indiscriminate Israeli fire aboard the ship. Nine people were killed and dozens injured when Israeli forces boarded and seized what was the largest passenger vessel in the six-ship Gaza Freedom Flotilla in the international waters of the Mediterranean Sea about 80 miles west of the coast of Israel.

Starting at about 43 min 29 sec into the footage we begin to see injured people being carried by other passengers. This continues throughout the rest of the footage -- some of the people have gunshot wounds in the neck, shoulders, stomach, legs, or are so covered in blood it is difficult to tell where they have been hit. At 46 min 58 sec, for example, we see a white-haired man with blood pouring from his legs being carried down a main staircase into a lower deck of the ship to an area where other injured people are being treated: 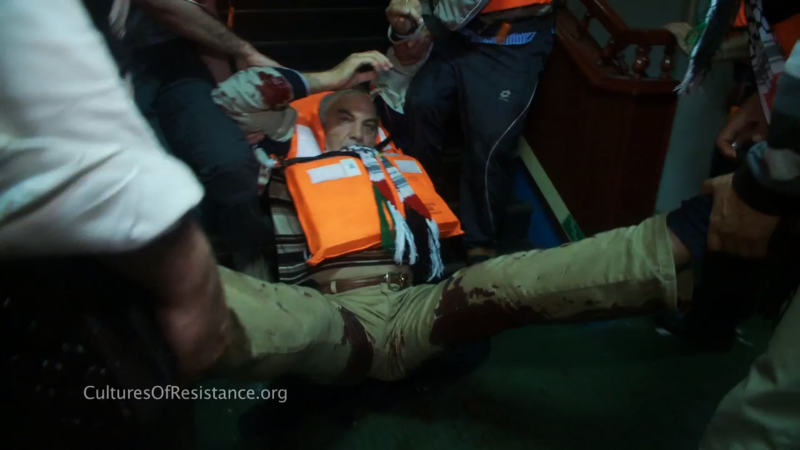 The injured man in the picture above appears to be Çetin Topçuoglu, 54, who coached Turkey's national Taekwondo team, and who subsequently died of his injuries. As he is brought downstairs a woman, who appears from many other published photographs to be his wife Çigdem Topçuoglu, watches: 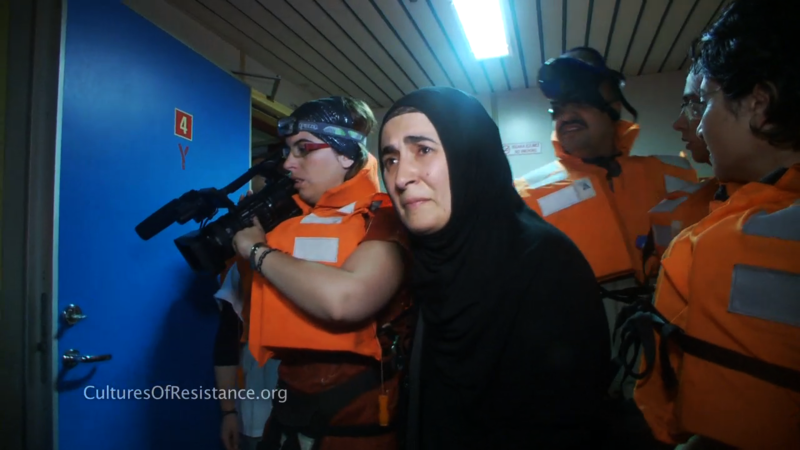 There are several other disturbing scenes of severely injured and dead people. Israel claims that its soldiers, who invaded and hijacked the Mavi Marmara along with the other five ships and then kidnapped all their passengers and forced them to the Israeli port of Ashdod, fired live ammunition only in self-defense -- when they faced imminent risk of harm. But at least one sequence in the CoR footage disproves this claim.

Starting at about 50 minutes the camera operator walks up the staircase from the area where the injured are being treated on blood covered floors. There are many people on the landing and up the next flight of stairs. Some are holding sticks, others cameras. There is blood on the wall: 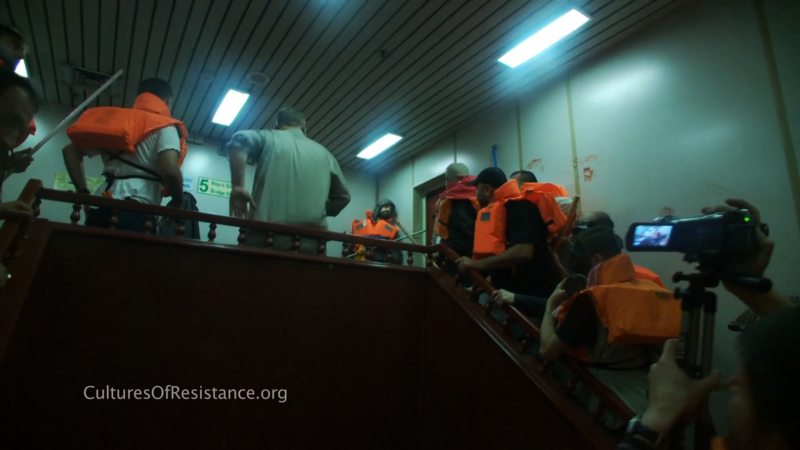 At the top of the stairs one man is standing against the wall trying to peer out of a porthole through the door leading to the outside deck. On the wall is a sign that says "5 Bridge Deck." At about 51 min 5 sec there is the sound of a gunshot and the man dives. There is commotion as people apparently prepare to defend the lower deck area in case of an Israeli invasion. Someone shouts "la ilaha illa allah" (There is no God but God) -- a common exclamation in the face of danger. It is apparent that Israelis are shooting through the porthole. At 50 min 52 sec, the red dot from a laser gunsight comes through the porthole and illuminates the internal wall of the ship: 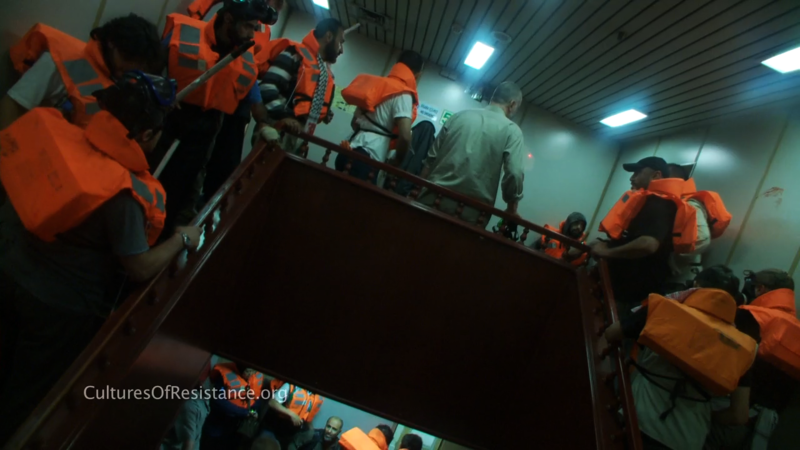 At about 52 min 25 sec one of the passengers pushes open the door with a pole but recoils as there is a loud popping sound and flash, possibly another gunshot. After this the camera operator pans away and goes back down the stairs to the area where injured people are being treated.

Careful analysis of the frames shows that the Israelis had been using live fire. This can be seen by the damage done to the door jamb in the following stills, the first taken at 50 min 31 sec and the second about a minute later at 51 min 47 sec: 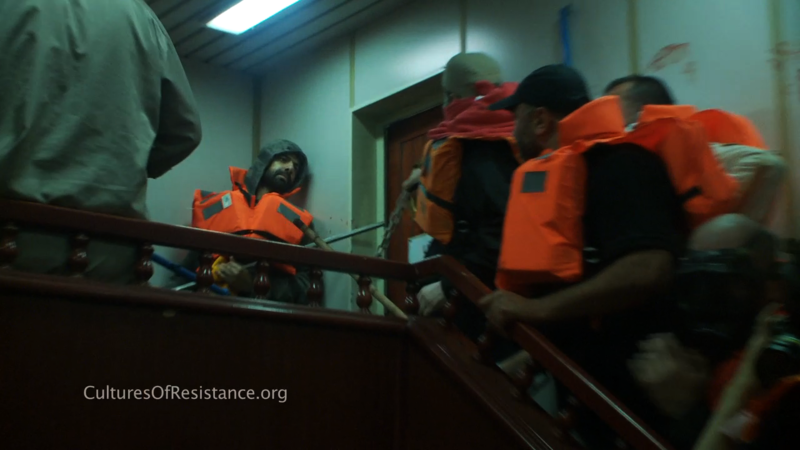 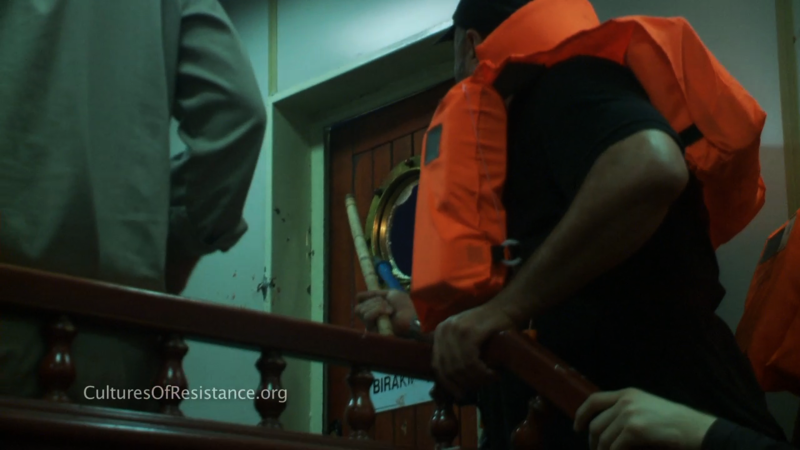 This single sequence proves that Israeli hijackers fired live ammunition into crowded spaces when they were not threatened from inside the space and could not have had a clear view of whom they might hit. The cameras and recordings that Israel seized and confiscated may contain many other such sequences. No wonder Israel is so adamant about hiding the evidence and rejecting a truly independent investigation.