UPDATED: Mavi Marmara was fleeing west at full-speed at time Israel claims "rioters initiate confrontation with IDF soldiers," and had already been under sustained attack for some time.

The ship Mavi Marmara was not heading toward Israel or Israeli territorial waters when it was attacked, boarded and comandeered by Israeli forces in the early hours of 31 May in the international waters of the Mediterranean Sea approximately 85 miles west of Haifa. Had it stayed on its heading at that time it would not even have approached Gaza's waters.

Once the attack began, Mavi Marmara apparently attempted to take evasive action, but Israel pressed on with its violent takeover of the ship nevertheless. Nine people were killed and dozens wounded when Israeli forces in fast patrol boats and helicopters attacked and boarded the Mavi Marmara, which was part of the six-ship Freedom Flotilla that had set out to break the blockade of the Gaza Strip.

Israel commandeered all six ships in the flotilla and forced them to sail to the port of Ashdod where the approximately 700 passengers from dozens of nationalities were held, and their property including images and video seized, until the vast majority were expelled from Israel. The ships, including the Mavi Marmara, and all their navigational equipment and logs, remain in Israeli possession.

Automatic Identification System (AIS) data transmitted by the Mavi Marmara and captured on the web site Marine Traffic indicates that prior to the Israeli attack, the Mavi Marmara, and presumably the rest of the flotilla in close formation, were traveling due south, parallel to the coast of Israel at a distance of more than 80 miles -- well outside Israel's 12-mile territorial limit. At 00:56:46 UTC (Coordinated Universal Time), or 3:56 am local time (UTC+3), according to the AIS data, Mavi Marmara was at coordinates N 32° 47' 37.3518", E 33° 31' 34.14" and moving south southwest on heading 184 at 7.4 knots.

The exact moment the Israeli assault on the Mavi Marmara began is difficult to pinpoint, but most eyewitnesses have said it occurred roughly between 4 and 4:30 am local time (01:00 to 01:30 UTC) and coincided with the performance of fajr (dawn) prayers by a number of the ship's Muslim passengers.

It is not yet clear how long it took for the Israelis to gain full control of the ship. It was been widely reported there was a considerable struggle. Israel has so far released only highly selective video clips with time stamps obscured.

Australian journalist Paul McGeough, who was on one of the smaller ships, reported:

The Israeli attack was timed for dawn prayers -– when a good number of the men aboard the Mavi Marmara were praying on the aft deck of the big Turkish passenger ferry, as it motored steadily through international waters in the eastern Mediterranean Sea.

Jerry Campbell awoke at 4 am [01:00 UTC] to attend dawn prayers but she had hardly bowed her head before she was dragged off to a nursing station to help treat four gunshot victims.

Similarly, Norazma Abdullah, a Malaysian national, told Reuters, "The Israelis just attacked us without warning after dawn prayer," adding, "They fired with some rubber bullets but after some time they used live ammunition. Five were dead on the spot and after that we surrendered." ("Israel attacked ships 'without warning,' freed activists say," Reuters, 2 June 2010).

Dawn prayers are usually performed at or shortly after the start of astronomical twilight, the period when the center of the sun is between 12° and 18° below the horizon -- when it is still dark. Passengers on the ships were observing Eastern European Summer Time.

Aljazeera correspondent Jamal Elshayyal who was on the Mavi Marmara wrote, "Just after 4 am local time, the Israeli military attacked the ship, in international waters. It was an unprovoked attack. Tear gas was used, sound grenades were launched, and rubber coated steel bullets were fired from almost every direction."

At 01:51 UTC (4:51 am local), the Twitter account @ShipToGazaGr, which was in direct contact with the two Greek-flagged flotilla ships Eleftheri Mesogeios and Sfendoni tweeted, "we have lost comms with ship, last contact was mentioning attack, we are in alert mode."

At that moment, 01:51:00 UTC, Mavi Marmara was already due almost straight west on heading 247 away from Israel and the Gaza Strip and had sped up to 12.6 knots. 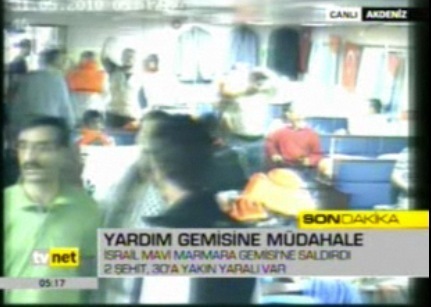 I was watching Turkish television over the internet and at 02:21 UTC, I tweeted, "URGENT: Turkish TV: Israel attacks Mavi Marmari, 2 Dead, 30 injured #Flotilla #Gaza," and posted a screen capture of the TV screen. The TV shot carries Turkish local time of 5:17 am (UTC+3) which was 02:17 UTC.

After this, there is no more AIS data. Presumably the ship was then under full Israeli control and had begun to head toward Ashdod.

Israeli warships had been shadowing the flotilla for some time. According to Aljazeera's Elshayyal, they had been spotted at approximately 11 pm local time (20:00 UTC) and passengers had been ordered to don life vests. Elshayyal reported that, "At 2 am local time [23:00 UTC] the organisers informed me that they had re-routed the ship, as far away from Israel as possible, as deep into international waters as they could. They did not want a confrontation with the Israeli military, at least not by night."

Gulf News reporter Abbas Al-Lawati (@allawati on Twitter), who was aboard the ship, told me by telephone today that he too was told by flotilla organizers that the ships would re-route slightly to "buy-time" and avoid any confrontation with the Israelis.

The AIS data does not show that the Mavi Marmara changed course around that time, but rather remained on a southerly track that was taking it gradually further west, deeper into international waters.

The Israeli account, as given by the office of the IDF Spokesperson was as follows:

Early this morning, IDF Naval Forces boarded six ships attempting to break the maritime closure of the Gaza Strip. This happened after numerous warnings from Israel and the Israeli Navy that were issued prior to the action. The Israel Navy requested the ships to redirect toward Ashdod where they would be able to unload their aid supplies which would then be transferred over land after undergoing security inspections.

The interception of the flotilla followed numerous warnings given to the organizers of the flotilla before leaving their ports as well as while sailing towards the Gaza Strip.

Yet the navigation data indicate the ships weren't actually headed "towards" Gaza at the time they were attacked. An independent investigation -- which Israel has so far refused -- must address the following questions:

The possibility that Israel initiated the attack on the ships when they were heading away from its shores, and pressed on with it when at least one of them, the largest, Mavi Marmara tried to flee at full speed, only compounds the crime. There must be a full, independent investigation. There must be justice for the victims and their families.

In order to bolster its claim that its soldiers killed passengers aboard the Mavi Marmara in self-defense, amid a brutal and pre-planned attack by "rioters," the Israeli army released a video on 2 June apparently taken from the ship's closed circuit TV cameras. The IDF statement accompanying the video claims

The passengers of the Gaza flotilla are seen here preparing for confrontation with the IDF soldiers. The rioters put on gas masks and arm themselves with rods, slingshots, broken bottles, metal objects, and water hoses. As the IDF soldiers approach the ship the rioters immediately attack the forces by hurling these objects at them.

On the video, the Israeli army has placed a caption stating "Rioters initiate confrontation with IDF soldiers."

The video shows passengers wearing life vests, some carrying sticks or other makeshift weapons and looking over the sides of the ship as if in anticipation of boarding attempts by Israeli soldiers.

But the time stamp indicates the video was taken at 5:03 am (02:03 UTC). If this is accurate then the ship had already been under attack for almost an hour, and at this time was located at position N 32° 41' 7.8714", E 33° 25' 10.0164"  and was due directly west on heading 271 at speed 12.7 knots. In other words, far from preparing to "initiate confrontation," the passengers were attempting desperately to defend a fleeing ship that had already come under a lethal and sustained attack from the sea and from the air.

Once again, it is clear that nothing the IDF or Israeli government says can be taken at face value -- especially when they are withholding video and other media confiscated from passengers, while releasing highly selective and manipulated materials in order to offer a narrative that has proven time and again to be falsified.